Groei&Bloei published an article about Erwin Stam Tuinstudio’s 3D-printed Luxury Raingarden. The model garden was on show during miNiATURE Amsterdam in the autumn of 2014. Earlier this year this exhibition was introduced in London by garden designer Andrew Fisher Tomlin. Ten designers from England, Australia, Sweden and the Netherlands showed their design during miNiATURE Amsterdam. The exhibition was officially opened by the British ambassador to the Netherlands, Sir Geoffrey Adams. 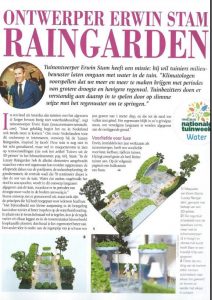 9.08.21
Previous post
GARDEN DESIGN FOR THE AUCTION OF THE AMSTERDAM DINNER 2015
Next post
COMPLETION OF AN IBIZA GARDEN IN LIMBURG
Menu